And now for something completely different...HoneyDrive

For quite a while now, I've wanted to set up a honeypot and see what I can learn from it. I was happy to find out that the Ion at BruteForce Labs has put together a great "all in one" virtual machine with preconfigured honeypots. The virtual machine is called HoneyDrive. Upon learning about it, I decided this was as good a time as any to try out running a honeypot.

HoneyDrive makes it incredibly easy to get started. It includes Kippo, Dionaea, Honeyd and LaBrea honeypots, as well as lots of related software tools, including (from the website) "A full suite of security, forensics and anti-malware tools for network monitoring, malicious shellcode and PDF analysis, such as ntop, p0f, EtherApe, nmap, DFF, Wireshark, ClamAV, ettercap, Automater, UPX, pdftk, Flasm, pdf-parser, Pyew, dex2jar and more." As you can see, it's packed full of great stuff.

It is ready for download as a VirtualBox .ova file, so all you have to do is open VirtualBox, click File-Import Appliance and select the HoneyDrive .ova file. Once the import is finished, you will have a new, ready to run HoneyDrive vm available in your inventory. Then, just configure its settings and start it up.

I changed a few of the settings prior to first run. I changed the network settings to make sure it would bind to the correct network card, as I have more than one in the host machine and wanted to have it on the correct network. I also bumped up the ram for the vm a little. I won't go in to how to do these things, as they are pretty basic changes for anyone who has previously used VirtualBox.

After starting up the machine and verifying my networking was set up right, I was ready to get started. The next decision was, which honeypot would I try first? My good friend Leon van der Eijk has written on his blog and spoken about his work with the Kippo ssh honeypot. Likewise, Andrew Waite has posted quite a bit about Kippo and Dionaea on his InfoSanity blog. They are my "go to" guys when I have a honeypot question.

I decided to go with Dionaea to begin with, as I've been wanting to try a honeypot for the purpose of malware collection. Setup of Dionaea in HoneyDrive is quite easy, although I found it was unable to bind to port 80 at first. I discovered Apache webserver was running by default on HoneyDrive and it was interfering with Dionaea and port 80, so I shut down Apache and all worked well from there. Well, almost all.

As I said, my goal with Dionaea was to collect malware. Unfortunately, my Internet service provider apparently filters port 445 (SMB/CIFS), so I got no connections at all on that port and no files accordingly. I did get lots of connections on ports 80, 443, 1433 and 3306, however, so it wasn't a total loss. The majority of IP addresses connecting to those ports were from (big surprise) China. I left Dionaea running for a couple days and then decided I wanted to try out Kippo.

Kippo is an ssh honeypot. It has a fake filesystem, simulating a Debian Linux server and that is what the attacker sees on login. They can navigate around, but can't do any real damage. It is absolutely simple to get started in HoneyDrive and I saw almost immediate results. Ion has created some great ways to monitor your Kippo with custom made scripts and the ability to view your Kippo stats via web browser (see pics). 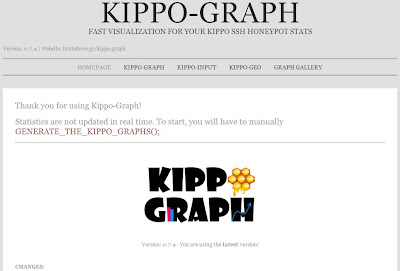 Above, you see the initial start screen for Ion's Kippo-Graph. The results aren't delivered in real-time, so you have to click "Generate The Kippo Graphs". What follows is incredibly detailed information. There is much more to Kippo Graph than you'll see in the following pictures, but they will at least give you a taste of what's available. 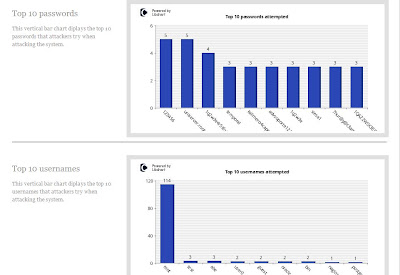 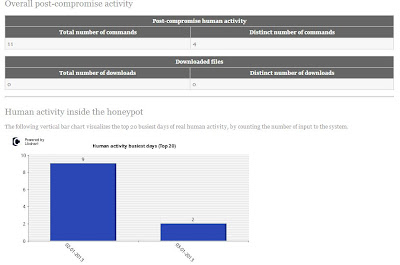 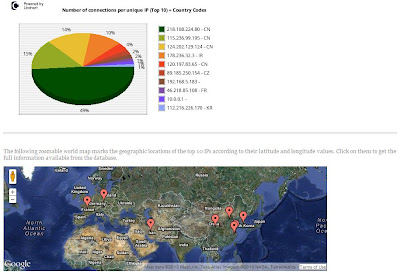 Kippo has only been running for about a day as of this writing, so there aren't lots of stats yet. Still, it appears some have shown some interest in trying to log in. A few of the logins are mine, just testing from various IP addresses, but the bulk of login attempts are from other countries.

One amazing thing about Kippo is the ability to play back "recordings" of logins. When someone logs in to the Kippo fake filesystem and tries to navigate around what they think is a server of some sort, Kippo records their every move and saves it to a log file. You may then use the playlog.py utility to replay the attacker's activity, just like you recorded it on your DVR. You can see every command they typed, seeing it just like you were watching them live at the console. Kippo will be sure to save a copy of any files they download to it. For whatever reason, no one has done more than attempt to log in so far, despite the simple password, so I have no log replays to show you right now. When I finally get a good one, I'll post it here so you can see how it works.

Tektip has some good videos on HoneyDrive and Kippo too. I recommend you watch them to get a greater feel for how all this works. I plan to try out some of the other honeypots in Honeydrive soon, but I'm currently enjoying working with Kippo. I'll probably try out Honeyd in the next couple days, however.

If you've always been curious about running a honeypot, I can't recommend HoneyDrive strongly enough. It is, without a doubt, the fastest and easiest way to get started. Congratulations and thanks to Ion for putting it all together. Thanks also to all the honeypot and other tool developers whose work is included in HoneyDrive.
Posted by Ken Pryor at 10:29 AM